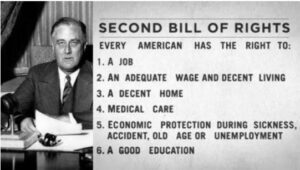 In the 1930s, American President Franklin Delano Roosevelt (FDR) worked against Congress and Senate obstruction to ensure tens of millions of starving Americans had the basics of life. His Second Bill of Rights policies were taken straight from the Bible, our first Constitution (the Bible is an update of the Codes of Hammurabi and Ur’Nammu – see “The Book“), and they laid the foundation for the American Dream’s strong Social Contract which then built the greatest economy in history

Japan, Germany, and Italy (the FDR-Democracies) lost the war, but won the peace when FDR’s Second Bill of Rights policies were added to their Constitutions in the Marshall Plan. The Netherlands, Austria, and Finland added these conventions as well. “FDR Democracies” are the only G7 nations with advancing economies today; ALL – have advancing economies, Top-20 social contracts, six-weeks vacation, maternity leaves, great schools (and free university in many cases), great healthcare, and lower taxes than private insurance scheme countries.

EVERY large nation that follows FDR’s Constitution today is advancing

EVERY nation (with a greater-than 15 million population) that does not, is collapsing

Why don’t we teach this today?  Because it makes no common sense not to repeat proven success

No political parties in North America support these policies

FDR’s Policies are here on the left. Mr. Trump’s team, for example, supported only: Full Employment and Nationalism only

Voting to become an FDR Democracy, simply needs us to fund and vote for a thesis-built ACT Party nationally. See examples of ACT Parties at ACT Canada and ACT America

Immigration policy and FDI (Foreign Direct Investment) add a higher risk of collapse-trending economies, and there is no benefit to adding population in an economy

The United States has the second-highest number of millionaires, but with wealth inequity at a very high 80 and income inequity at an equally high 41, income and wealth do not distribute as is needed to create an advancing economy here. 130 million people, the bottom 40%, own less than 0.3% of the wealth in America. The costs of lost productivity is a staggering $37 billion dollars per day or $13.6 trillion annually in America. Statistically, the U.S.A.’s chances of improving its present collapse-trending economy are 50% lower than another low-inequity nation.

In the L versus U-Shaped Charts here, we see that some countries managed inequity better than others. In the TEPs here, we see the clear benefit of keeping Wealth GINIs below 67% and Income GINIs below 33%. This is confirmed by the U.S. Historical Income GINI chart that shows inequality leaping by 25% in the 1920s and then correcting under FDR’s New Deal and Full-Employment Policies from 1940 to 1944. When the United States hit 33%, it built the greatest economy in history – and then they lost this advantage in the 1980s under Ronald Reagan’s Low-Tax policies

In a monetary system, access to income is as essential as air, food, or shelter. Citizens cannot live without access to basic incomes, and they also cannot be productive for the economy. Heads of Households should be fully employed first, as they single income families pay for two families, and these individuals should not be faced with starvation wage policies

The Right to a Good Home

The Right to a good home is a basic human right. The decision to rent accommodation might be preferred but it must be voluntary and everyone should have the ability to purchase a home easily with available incomes. The implications of this Right are wide-ranging:

Debt forgiveness is an essential and time-honored approach to resetting the manifest imbalances seen in a global mature capitalism. EVERY MAJOR EUROPEAN NATION WROTE DOWN DEBT (up to 250% of GDP in Germany’s case) in the 1930s and 1940s. Debt can improve an economy, but it’s an expensive way to accomplish these gains. Look to other sustainable, causal policies first to improve economies

When an employee is hired at age 25 and fired at 50, that family’s pension will almost certainly not be able to continue to a normal 35-year term, which costs every Canadian family an average $1 million each.

Trends are similar for Unemployment and Suicide as 50+ age males are targetted by government and business hiring policies for termination and refusals of employment.

So, our present government’s policy is creating a 1.5% population infanticide annually by driving infertility to 1.45, and it’s also killing 50+ aged men – due to driving poverty for Canadian families – at a rate 100+% higher than 30-years-ago.

In a monetary society, Salaries must exceed Cost-of-living (CoL) to afford freedom and to ensure that every country’s most important assets, it’s citizens, can each contribute to the economy. When Salaries fall to CoL, we lose our Social Contracts, and when salaries are lower than CoL we watch starvation wages erode Social Contracts until today every country loses $3.6 billion per day to them. In democracies greater than 15-million, Constitutional guarantees for our basic needs must ensure rights of food, shelter, healthcare, security, education, …  or the costs of productivity loss climbs quickly to many billions of dollars per day. We measure Social Contract by Social KPIs like longevity and Social Problems like poverty, suicide. See a calculation of Social Contract at TransitionEconomics.info and see an explanation of why every $1 invested in Social Contract returns $4 here

Diversity (Onshoring & Offshoring), Inclusion, and Female Inequity in High-Income nations – are unsustainable policies. They lead to disrespect, division, sexism, racism, ageism and they drive unsustainable birthrates, starvation wages, and denials of access to income that stall economies. Divorce and birthrates decimated American societies in the 1930s – and we see these statistics again today. Family Values and Single Income Family Policies were adopted in the U.S. during our last mature capitalism out of necessity, to return that failed society to viability again. No great civilization in history has survived to today, despite 100-generations calling themselves “modern”, so a consensus can never replace expert leadership and sustainable policy. Respect, Empathy, and Family Values are sustainable policies