Why has the United Nations Failed?

Home Why has the United Nations Failed? 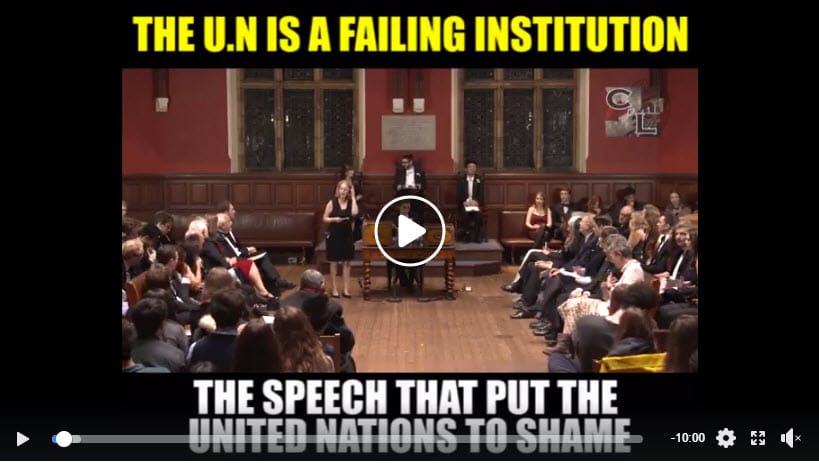 The United Nations has a lot of failings and corrections needed, but should it be scrapped?

This article was inspired by a presentation given to the United Nations by scholar Anne Bayefsky  @AnneBayefsky; in her terrific speech at the U.N. <date unknown>. See this speech at https://www.facebook.com/watch/?t=16&v=510489512775586.

In a roundabout way, Ms. Bayefsky does touch on important human rights mishandling and facts in her speech; but she also showcases that discussion at the United Nations too-easily bogs down in sidetracks and rabbit holes. Her presentation suggests no strategic solutions to these problems either – as she highlights a list of legitimate tactical problems point-by-point. I might be misunderstanding protocol here – and perhaps solutions are forbidden at this point in their process – but I doubt that’s true based on the U.N.’s consistent poor execution and 70-year record of performance in matters improving Human Rights and Social Contracts. It’s obvious that the lack of a professional project management life-cycle process (PMLC) can take at least some of the blame for not moving forward discussions and progress in Human Rights.

Building low social contracts globally is dangerous – and it’s expensive too; 160 nations lose an average of $3.6 billion per day today (see an explanation for Social Contract costs in every nation at https://csq1.org/SCP).

Clearly, tactical discussions bog down the U.N. easily – and this makes it ineffective, but Ms.Bayefsky does not also explain important context. How was the discussion of Human Rights important to the U.N.’s original mandate?

I write theses on the topic of Sustainable Societies; my Sustainable Societies Series are How-tos on building World Peace, and I am also the founder of a new science in econometrics called Transition Economics (TE), and in SUSTAIN PMLC. These tools will add context as I discuss improving a presentation to correct – or to decide the fate of the United Nations.

In the speech, Ms. Bayefsky defends democracy; when democracy does not work well once national populations exceed 14 million. The FDR-Democracies stand as a rare exception to this rule; these are the nations that had FDR’s Second Bill of Rights installed in their Constitution. The only G7 nations with advancing economies, six-week vacations, great schools, health care, the lowest taxes and cost of living, and so on, are FDR-Democracies. Every FDR-Democracy has an advancing economy today in fact; I’m referring to Germany, Japan, Italy, Austria, and others updated by the Marshall Plan after WW-II.

The countries that lost the war, won the peace.

Mrs. Eleanor Roosevelt created the Univeral Declaration of Human Rights at the U.N. in 1948, based on her husband’s 1944 Second Bill of Rights – https://www.youtube.com/watch?v=D4ihUGArTik

Ms. Bayefsky’s excellent speech did not recall that the U.N. was created with the goals of: first, to avoid another Mature Capitalism – and the World Wars that these often create – see the chart on the right here. In fact, there were more world conflicts between 2010 and 2020 than at any other time in history – and this condition was also true before WWI and WWII.

The second reason the U.N. was created, was to ensure a minimum of Human Rights. Why? Because tens of millions were dying after the war in Europe – of hunger, disease, and exposure. FDR, like Dickens, Byron, Hugo, and many others, has seen first-hand in America that strong Social Contracts, Respect, Empathy, Good, the Golden Rule, are essential for any society.

With these important guaranteed policies, you are left with only unproductive evil and dystopia in any society. As it happens, strong social contracts also build strong economies reliably, and as I mentioned – the foundation that Mr. Roosevelt was able to build in his four landslide election wins, was the strongest Social Contract and Economy in history.

A United Nations surely is needed, but so are Right Plans – both nationally and globally. Planning that pragmatically builds these strong social contracts – and eventually World Peace too.

In these two primary goals, the United Nations has failed. Worse, at present, it has no plan to address these shortcomings – other than to sponsor a series of Goals (SDGs). The Bibles set out the goals of a sustainable society two millennia ago, and we still don’t have sustainable societies today. Goals – by themselves, are not enough – as any engineer can assure you. Project Plans and effective execution and monitoring, are needed to build anything reliably.

So, the present United Nations is unviable – unless you prefer to wait a millennium to confirm this – and it has to be torn down, but it must then also be rebuilt into a working organization with a working Right Plan once again.

The Right Plan is the one whose ends, means, practical thinking and purposeful action result in a Good Life. A life full of things you need – and not necessarily a life full of everything you want. With a little luck, goods in body and soul, and by making a habit of good choices that reflect moral virtues of temperance, courage, and justice, a Good Life should be sought and found

Right – because its the right thing to do of course. The next World War will be an extinction event.

Right – because it works